Parish Councillors are cordially invited to the above meeting which will be held on Wednesday, 21st October 2020 and which commences at 7.00 p.m.  Cllrs need to ‘log in’ from 6.50pm to ensure all are ready for commencement of the meeting

In light of continued guidance with regard to the Coronavirus pandemic, the above meeting will be held remotely and managed by Zoom – Any members of the public wishing to join the meeting should contact the Clerk for directions on how to do this

PLEASE NOTE TO FACILITATE MINUTE TAKING, THIS MEETING WILL BE RECORDED.  THE RECORDING HOWEVER WILL BE DELETED AT THE POINT THE MINUTES ARE APPROVED BY THE CHAIR

BUSINESS TO BE TRANSACTED

7.1  Consideration and voting of Applications received for the (co-opted) vacancy for a Parish Cllrs (All)

7.2  Update on issues of concern with the A1041 – speeding, diversions and blind spots (All)

7.3  Update on communications with Drax (overgrown greenery and scaffolding for Christmas lights) (Clerk)

7.5  Discuss and agree format for November meeting in light of ongoing pandemic and guidance (All)

7.6  Clerk to raise request for Cllrs to consider any projects in 2021/22 in light of preparation for precept

Item 7.1 will be a closed session for any members of the public due to the confidential nature of the item.

Kick the Habit – Switch off your engine whilst parked

At a time the Parish Council has received a number of complaints about parents leaving their engines running whilst dropping off their kids at Camblesforth School, Selby District Council is running a new district-wide campaign encouraging drivers to ‘kick the habit’ and switch off their engines while parked.

The campaign is urging people to think about the importance of clean air and the impact pollution has on them, their health and those around them.

Councillor Chris Pearson, Lead Executive member for Housing, Health and Culture, said: “Leaving your car engine idling causes air pollution which can easily be reduced by simply turning engines off when in traffic or waiting.

“Turning off your engine when parked up and waiting will not only improve air quality but will also save you money.”

The Kick the Habit campaign, which launches on Clean Air Day (8 October), will see information shared with pupils, parents, and teachers at a local primary school in a pilot to improve air quality around the school.

Headteacher at St Mary’s Catholic Primary School, in Brayton, Fiona Robertson explained: “We will be asking parents picking up their children from school to turn off their engines while they’re waiting and talking to our pupils about air pollution. This project is a great way to discuss the issue and highlight the personal actions that can be taken to improve air quality around our school.”

Air quality will also be monitored at the school – this information will then be used to assess pollution at specific times.

And across the district anti-idling posters and banners are going up in all council owned car parks in Selby, Tadcaster and Sherburn. These will also be installed in Selby at the taxi rank, at the Doncaster Road level crossing and on railings in the Crescent – areas that often see queuing traffic.

New Kick the Habit posters are also being made available to parish and town councils and local businesses. These can be used in car parks and other areas to tackle the issue. 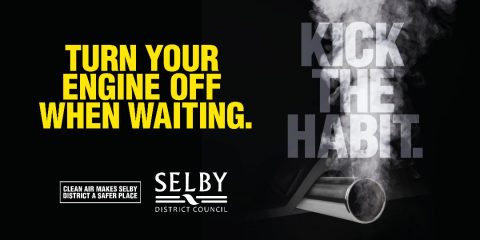 Following the implementation of the due statutory process, Selby District Council have confirmed there is no requirement for an election and Camblesforth Parish Council is permitted to commence a co-option process.

Applications are therefore invited for the role of Parish Cllr.  If you are interested in this challenging, but rewarding role, and the opportunity to influence village matters for the benefit of the whole community, please complete the required application form and return to the Parish Clerk, as instructed on the form.

Informal queries can be made to the Parish Clerk on 07749387757 or camblesforthclerk@sky.com

Applications should be submitted by close of business (5pm) on Monday, 19th October and Cllrs will consider applications at the October Meeting. 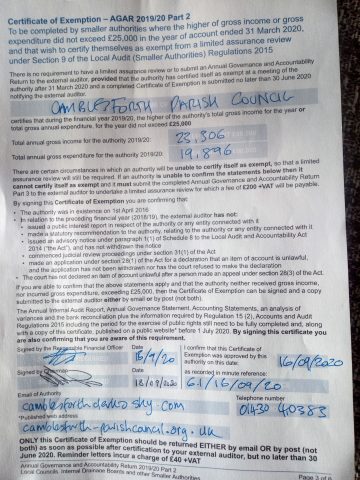 Format of Parish Meetings in light of Covid-19 Restrictions

In light of continued guidance and advice from regional Local Government bodies (including SDC) with regard to Corona-virus, for the foreseeable future Parish Meetings will be held remotely (on-line) and managed by Zoom in order to protect Cllrs and the public. This will be discussed and reviewed by Cllrs at each Parish Meeting.

Meetings are still held the third Wednesday in each month and commence at 7pm. These meetings are still open to the public and anyone wishing to join a meeting should contact the Clerk for directions on how to do this prior to the meeting (at the point the notice is posted). You will need access to a PC / Laptop or similar desktop device. A smartphone can be used, but connectivity may not be as good. If you have any questions please contact the Clerk on camblesforthclerk@sky.com or 07749 387757

PLEASE NOTE TO FACILITATE MINUTE TAKING, MEETINGS WILL BE RECORDED. THE RECORDING HOWEVER WILL BE DELETED AT THE POINT THE MINUTES ARE APPROVED BY THE CHAIR